The 90s are making a comeback, and Tag Heuer isn’t going to be left behind in the trend! Tag Heuer Link has made a comeback almost thirty years later. This luxurious watch is better than ever, and there’s not just one; the Tag Heuer watches released a whole series.

History of the TAG Heuer Link

Back in 1987, when it was launched, it was actually named “The S/el.” But this name was soon changed in 1999 when it was revamped. The new name was The Link, which reflected on one of its most defining characteristics; the S-shaped links. This distinct feature gave the Tag Heuer Link watch its whole look.

The new Link is one of the newest Tag Heuer watches and also one of the most elegant ones. This timepiece has a cushion-shaped case with a flat brushed steel bezel. It features hours, minutes and seconds, as well as a small date window.

The renewed version of the Link comes in a 41mm case. It has been softened significantly to give it more of a curve. Even the finishing on the stainless steel case has been upgraded. It’s both brushed and polished to create a unique shape and contrast. The polished effect is used with a lot of care to avoid a pretentious and ostentatious look; the same applies to the side of the case and the bracelet links. 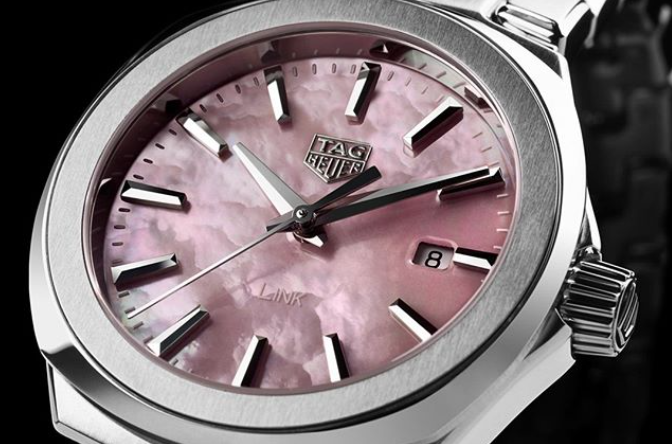 To provide more of a variation to this luxury item, the rounded case is a part of the newly designed bezel, which basically has two parts; a thin cushion-like bezel with slanted square edges. Into this bezel is set the regular circular bezel.

More About the New Look

To match the new look, the lugs have been refined to have a shapelier finish. They have a brushed metal finish as well on the top side. The older version featured an integrated case and bracelet, but the newer versions have traditional open lugs. Thus it is perfect for leather straps and other bracelets even though, Tag Heuer doesn’t officially offer a leather strap option in this Link series.

Unsurprisingly, the bracelet is also completely re-designed. The iconic S-shaped links are flatter, and the much squarer links sit close together. The differences are very subtle, but when grouped together, they provide a very sleek and modern look. These bracelets contribute hugely to the comfort, thanks to the way the S-shaped link flex and curve around the wrists snugly.

Link Caliber 5 is one of the watches from the series. The watch is a caliber 5, Swiss Sellita SW200 automatic, whose self-winding movement displays hours, minutes, seconds and date.  It promises 38 hours of power reserve.  The movement is sufficient enough for the same demographic that prefers a Swiss movement over any other. The movement becomes much more visible over the sapphire crystal case back window.

The dial, along with the combination of the vibrant color on the case back, put the focus on the perfect proportions and make it much more legible. The bold and large hour markers complement the uncluttered and clean style of the dial. Besides all the features that give it its aesthetic, it’s also water-resistant, making it functional as well.  Overall, it’s sporty and definitely attention-grabbing.

Onto the next model, the Link caliber S is also the one with the biggest case size – 43mm. The dial is reminiscent of the 2010 Link caliber S with the clear logo of the Tag Heuer. Although the Tag Heuer Link Chronograph is one of the most famous ones, this isn’t a part of the chronograph series no matter how much it resembles it.

The slightly larger hour-markers tie the whole look together. The sub-registers on this one are a little deeper or rather sunken, which puts a lot of emphasis on them. Not to forget that the semi-circle registers are textured for an added effect. While more people prefer the automatic movements in watches, the electro-mechanical movement only serves to a specific type of predilection. 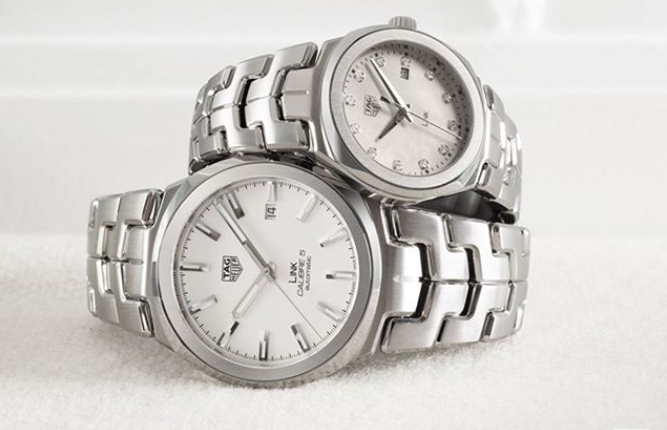 The newest Tag Heuer Link model is the Link chronograph which features a tri-compax layout and a beautiful stainless steel bracelet. The dial can be found in two colors; either black or blue. The sunray dial reflects lights onto itself in such an elegant way that it portrays different shades of blue depending on the position of the watch. Each hour marker is highly polished, and along with the sense of depth, they show the time with clear and unequivocal tone.

The case is also 40mm stainless steel with almost little to no sharp edges, exuding a soft and gently curving look. The anatomy of the case can be described as a cushion base and overlaid ring. The anatomy gives it such a shape that wearing it for a long time won’t feel heavy or uncomfortable. Tag Heuer clearly knows how to augment the appeal of this unusual case shape with a bit of polishing. Some surfaces can be seen as satin-brushed and others highly polished. This sort of blend further accentuates its enticing aesthetic.

The Caliber 17 movement serves to ease and a sort of robustness. The balance has a frequency of 28,800 VpH (4Hz) while the movement contains 37 jewels. The reserve of power is 42 hours. Despite all the perfectly aligned features, its asking price remains modest, considering the status of the company.

Get Your TAG Heuer Link Today

All in all, this series allocates style with comfort. While it’s something that requires a lot of balancing and experiments, Tag Heuer has done it flawlessly once again!