A Closer Look at the Grand Seiko Godzilla Watch

It Started with Destruction

Some serious destruction. And with this watch, Grand Seiko brings us a city-destroying monster tale that’s more than six decades in the making. Avid fans of creature features know that Godzilla first stomped onto the silver screen in 1954. In that fateful year, the raging beast tore through the streets of Tokyo and toppled one of the city’s famed landmarks. The Seiko Clock Tower that rises above its flagship Wako store. 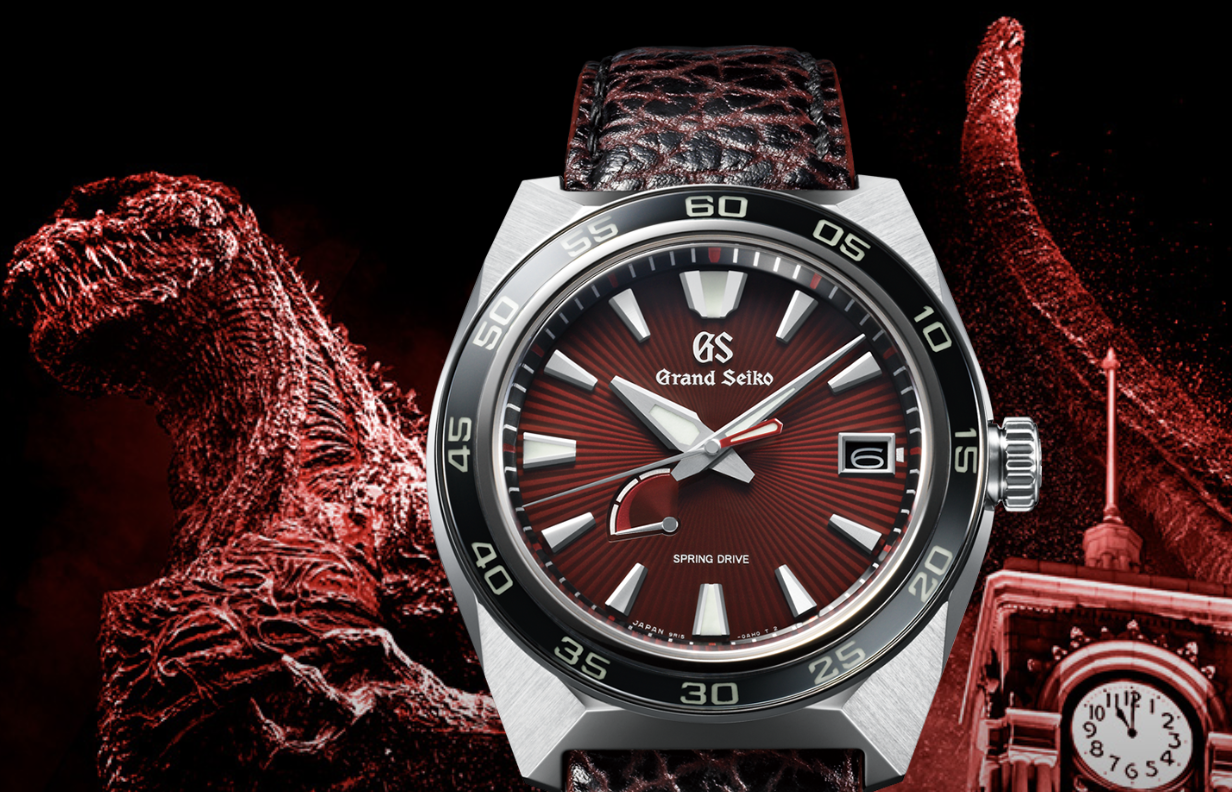 The Japanese watchmakers would never forget the carnage. No one would! To commemorate that pivotal silver-screen moment, Grand Seiko unleashes its homage to the cinema’s most-famous prehistoric sea monster (no, he’s not a mutated dinosaur!).

The watch delves deep into Japanese culture in some subtle ways. It embodies the spirit of “kaiju,” loosely translated to mean “strange monster.” It’s a theme we’ve seen repeated in almost innumerable ways in Japanese art and cinema. One with a dark history that harkens back to Japan’s weathering of devastating nuclear attacks during World War 2. While Godzilla was the first “kaiju,” he was followed by equally destructive beasts such as Mothra, Rodan, and Gamera.

Grand Seiko captures this monster madness with a watch that’s big and bold. It measures at 44.5mm and made of high-grade titanium. Titanium that might just be able to withstand Godzilla’s famed atomic breath. Short faceted lugs and a trim sapphire bezel keep the case design sporty.

GODZILLA! Article coming soon to barkandjack.com. In the mean time, jump over and check out the new posts. We are doing 3 posts a week now. ?? ____

A Field of Fiery Crimson

The red theme is immediately eye-catching. Dark red. A deep-hued crimson with echoes of bold burgundy to capture the essence of Godzilla’s fiery rage. A vivid red counterweight on the seconds hand pops with blood-red vibrancy. The Grand Seiko Godzilla dial is also an ode to the monster’s power. It’s a deep burgundy with a sunray finish that mimics the destructive heat rays that fly from the creature’s mouth. Twist the dial in the light and watch shades of dark go light. And vice versa, creating a moveable color palette that gives the watch a real feel of fluidity.

The hour markers, hands and bezel numbers are coated with Seiko’s signature Lumibriute that positively glows in low light. Protecting the face from any unwanted glare, an anti-reflective dual-curved sapphire crystal stands guard over the dial.

Monster Mayhem on the Back

While the dial offers a somewhat subtle homage to Godzilla, the back is more in-your-face with monster-movie lore. It’s here we see an illustration of Godzilla wreaking havoc on the Wako building just as he did in the 1954 film. The artwork comes from an esteemed member of the Godzilla movie world, Japanese artist and special effects master Shinji Higuchi. He’s been an integral part of the Godzilla Movie Universe since the 1990s and most recently created movie magic for the 2016 film Shin Godzilla.

Grand Seiko aficionados will undoubtedly draw a connection to the traditional Grand Seiko Lion. It’s an iconic and longtime image that’s emblazoned many a case back of Grand Seiko watches. Here, Godzilla strikes a fierce pose that’s similar to that of Grand Seiko’s usual King of the Jungle. Of course, Godzilla would win in a battle between the two.

Strap on Some Monster Skin

The sharkskin strap is arguably the most striking aspect of the watch. Undoubtedly the mind conjures up images of Godzilla’s rippled hide. And a field of asymmetrical shapes that calls to mind the craggy husk that protects Godzilla from the bullets, bombs, and missiles armed forces throw his way.

But in fairness, we should note that these military assaults may be a bit much. After all, Godzilla is an omnivore who doesn’t eat people. If you think about it, he’s at heart a good guy who has actually fought to save humanity from other beasts in a few of the films.

Godzilla Rising – To mark the 65th anniversary of Japan's most famous monster and pop culture phenomenon, @grandseikoofficial unveils a limited edition sports model Ref. SBGA405. Hit the WEBSITE for all the details. LINK IN BIO⁠⠀ ⁠⠀

Getting Inside the Grand Seiko Godzilla

Beyond celebrating its 65 years with Godzilla, Seiko is also marking 20 years with its revolutionary Spring Drive. While the movement was conceived in 1977, it wasn’t until 1999 that Seiko mass-produced the quartz-signal movement that’s accurate up to ten seconds a month. On the limited-edition Godzilla offering, the 72-hour power reserve is gauged by a small indicator at the dial’s eight-o’clock position.

With more than 30 feature films spanning over six decades, plus TV, video games, and comics, Godzilla has racked up legions of fans over the years. So surely these limited edition watches will go quickly. But if you are one of the lucky few, maybe you can snag a Grand Seiko Godzilla watch and wear a piece of monster-movie history on your wrist.