Every James Bond Watch That Was Worn

James Bond is possibly the most iconic fictional secret agent known in the entertainment industry. He has been through virtually every corner of the world and loves keeping a fine collection of watches under his sleeve. It’s fair to say that a James Bond watch is as vast in his nearly sixty-year career. From the Rolex Submariner in 1962’s Dr. No to the Omega Seamaster in 2015 Spectre, we’ve got all of Bond’s watches covered in this article. 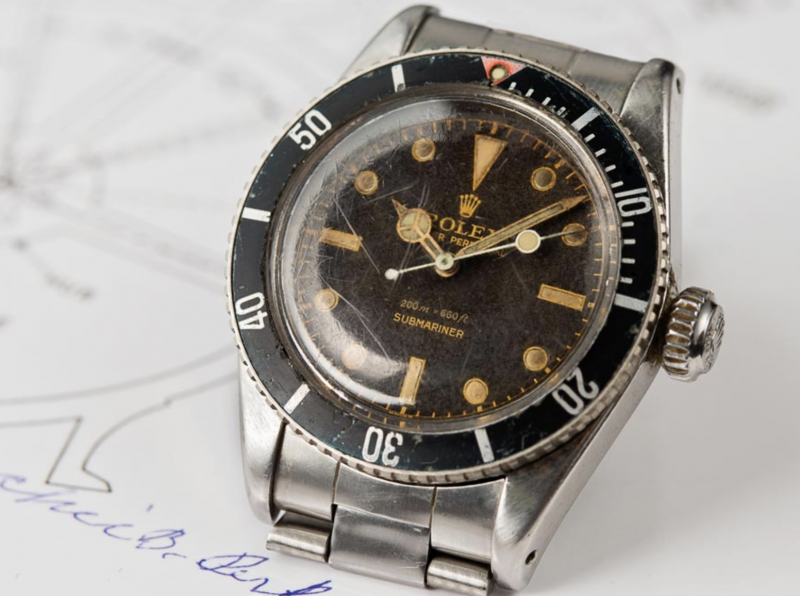 James Bond and his Rolexes go way back to Ian Fleming’s original novel, “Casino Royale”. And this isn’t surprising considering Fleming himself wore a Rolex Explorer reference 1016, on an extensible Oyster riveted strap.

Sean Connery’s premium Rolex Submariner returns in the sequel “from Russia with Love.” It was apparent that the Submariner was undoubtedly Connery’s favorite watch at that time.

We assure you, that the Submariner isn’t going to hog the spotlight of this article for long. The reference 6538 makes its third consecutive appearance for Connery’s Bond character and the most iconic of them all. The watch’s best scene is arguably when Bond checks his timepiece as a heroin factory blows up in the back.

Although Bond wears the Submariner Ref. 6538 for the last time, Thunderball debuted another historic new watch in the series. This watch is the Breitling Top Time reference 2002. Unfortunately, it was also the last time the watch was ever worn. It was also the first watch that MI6 Quartermaster Q gave to Bond as a gadget in the form of a watch.

5. You Only Live Twice – No Known Watches 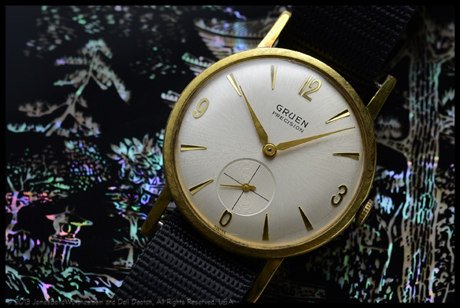 Yes, you read the title correctly. This was the first Bond film where the fans were left scratching their heads about the kind of timepiece the main character wore. Honestly, we’re not even sure if he had one, to begin with. Some say that he wore the same Gruen Precision as he did in Dr. No, but there were no true standout moments.

Connery took a back seat for this one as Australia’s George Lazenby portrays the infamous MI6 agent. Little did we know it would be his first and only appearance. Regardless, Lazenby’s Bond wore three different Rolex Submariners. First was the reference 5513 on a bracelet of iconic Oyster Steel. Then a Submariner ref. 6358 and then a Chronograph ref. 6238.

7. Diamonds Are Forever – No Watch Visible

Truth be told, we’d much rather have Connery reprise his role as Bond than care about whether he’s wearing a watch or not. 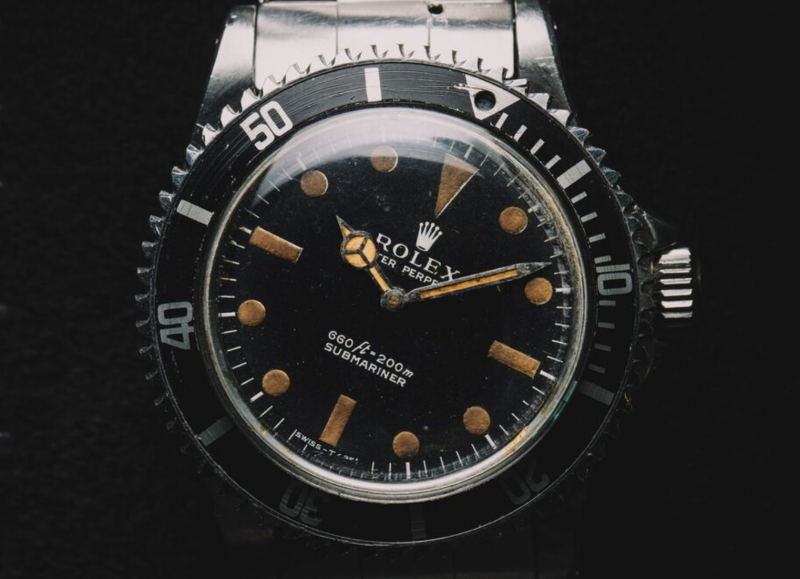 Not only do we get two watches in this film, but we also witness the debut of Roger Moore as Bond. First, we see Bond checking his time on a Hamilton Pulsar P2 Digital LED Watch. Then we see him getting his Rolex Submariner 5513 from Q Branch. Thanks to Q’s mechanical engineering, the watch provides Bond with a circular saw and a magnet. Both of which are nifty for getting Bond out of a rut or two.

9. The Man with the Golden Gun – Rolex Submariner Reference 5513

At this point, you wouldn’t be criticized for dubbing the reference 5513 for being the “James Bond Rolex.” Although the watch shows up again, it doesn’t come with any sweet tricks or gadgets. But it’s still a treat to look at.

In Roger Moore’s third appearance as Bond, he wears the Seiko reference 0674 LC throughout the entirety of the film. It’s also the only time Moore would wear a Seiko watch. However, the movie’s promotional images depict Bond wearing a Rolex GMT-Master instead.

It’s no surprise Bond would be wearing a totally tricked-out Seiko M354 Memory Bank Calendar, in this space-themed instalment. The significance of the watch is shown near the finale of the movie with a literal big bang.

12. For Your Eyes Only – Seiko Reference H357 Duo-Display

For the 13th Bond film, the H357 Duo-Display features an analog time display along with a digital display. This watch proved helpful to Bond in transmitting messages with an inbuilt microphone. 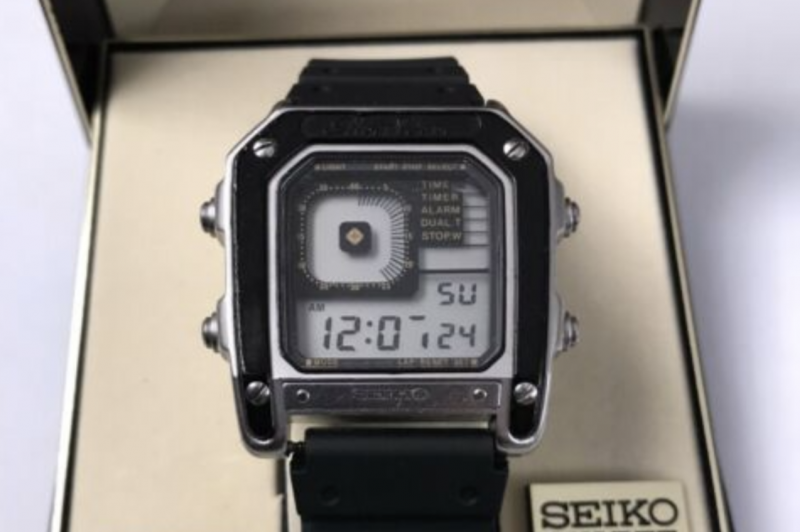 Despite the risqué name, Octopussy introduced us to a Seiko TV watch. It’s a digital sports chronograph with an extra feature added by Q Branch. It allows Bond to keep tabs on someone with a planted tracking device.

After Moore, came Timothy Dalton as Bond. In “The Living Daylights” Bond is wearing a TAG Heuer reference 980.031, making Dalton also the first Bond to wear a TAG Heuer. 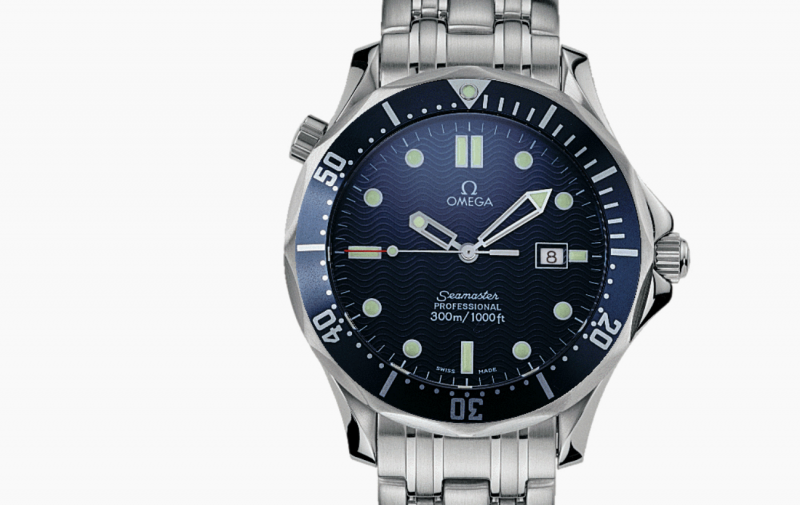 The 17th Bond movie featured Pierce Brosnan making his debut as the Suave British agent 007. It was also the first film to introduce a new line of James Bond watches with Omega. The model worn by Brosnan’s Bond character was the Seamaster Professional 300M reference 2541.80 quartz dive watch.

In his second outing as James Bond, Brosnan wore an automatic version of the quartz watch from GoldenEye. The watch is clearly visible when Bond picked it up in a Chinese safe house.

19. The World is Not Enough and Die Another Day – Omega Seamaster Professional 300M Reference 2531.80

Once again, Brosnan’s Bond wears the same watch in his final two films in the first two. Only this time, the watch is equipped with some of Q Branch’s ingenious goodies. 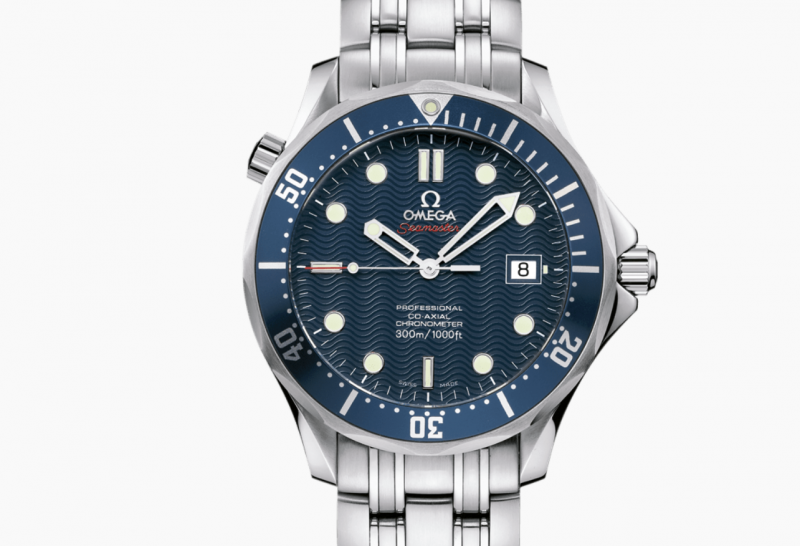 In his second outing as Bond, Craig is seen wearing The Omega Seamaster Planet Ocean 600m reference 2201.50. This version comes in a stainless steel bracelet but doesn’t get that much screen time, unfortunately.

There are two types of Omega Seamaster’s that appear in “Skyfall.” The first is a Planet Ocean 600M coming in a unique titanium case. The other was an Aqua Terra in a stainless steel bracelet and a stunning blue dial.

Like the title of the movie, the James Bond watch in this one was the Omega Seamaster 300 Spectre.