Designed for discovering far-off lands, the Rolex Explorer II has been gracing the wrists of adventure seekers for decades. It’s also a refined watch that wears well for dress-casual occasions. Let’s take a closer look at this iconic timepiece.

It Started in the 70s

1971 to be exact. That was the year Rolex decided that the Explorer needed a bigger brother and rolled out a larger version. The Explorer II made its debut with a 39mm stainless steel case and a complementing steel bracelet. As for the “explorer” part, it was made for adventurers with a 24-hour hand pointing to a fixed bezel. It  offered military time to explorers who might not be able to readily tell the difference between AM and PM in a dark situation such as caving. A generous application of lume adds to its use in low-light situations.

The first Rolex Explorer IIs have also earned the dubious nickname of “Steve McQueen’s’’ because the late actor was said to have worn one. But we’re not so sure about that, as there are no photographs with him wearing one and McQueen was famously partial to both the Rolex Submariner and the Heuer Monaco. Still, the name survives.

All About the White Dial 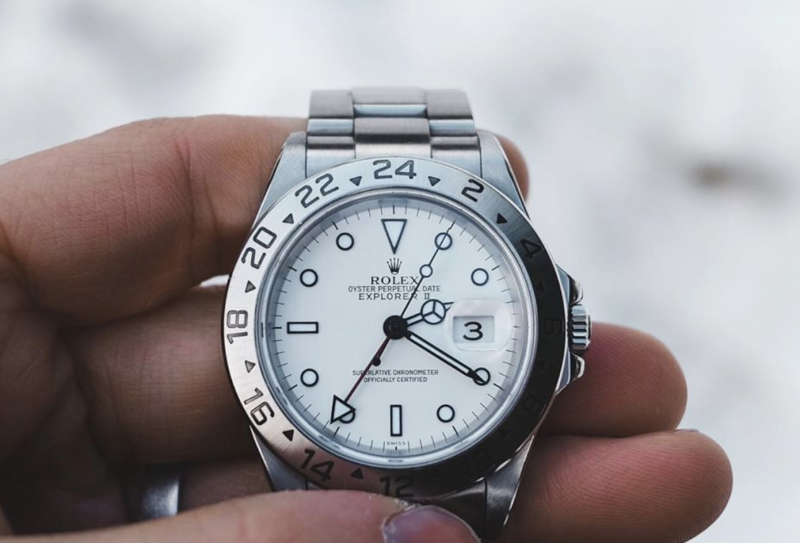 The white-dial versions we saw debut in 1984 are hands-down the most popular Rolex Explorer IIs, back then and today. The early white-dial models were produced from 1984 to 1989. They are highly sought after by collectors — and mainly for a slight defect! The white paint on the first incarnations fades more than it should, turning the dial to an ivory-cream color that watch enthusiasts simply love. In the 80s we also saw change with the addition of red paint and a small triangle to the 24-hour hand. Today that hand pops with vibrant orange and is a signature grace note to the elegant watch.

All Rolex aficionados know the nickname. The unofficial title of “Polar Explorer” was given to the reference 16570 versions that premiered in 1989. We then saw the addition of round hour markers with black outlines to create a striking black-and-white motif that remains in production today. The reference 16570 remained in production for 22 years after its debut.

And while the white dial is what catches the attention of most, a closer look at the face reveals true luxury. The hour markers are made from 18-carat gold! So tarnishing will never be a problem with these precious metals. 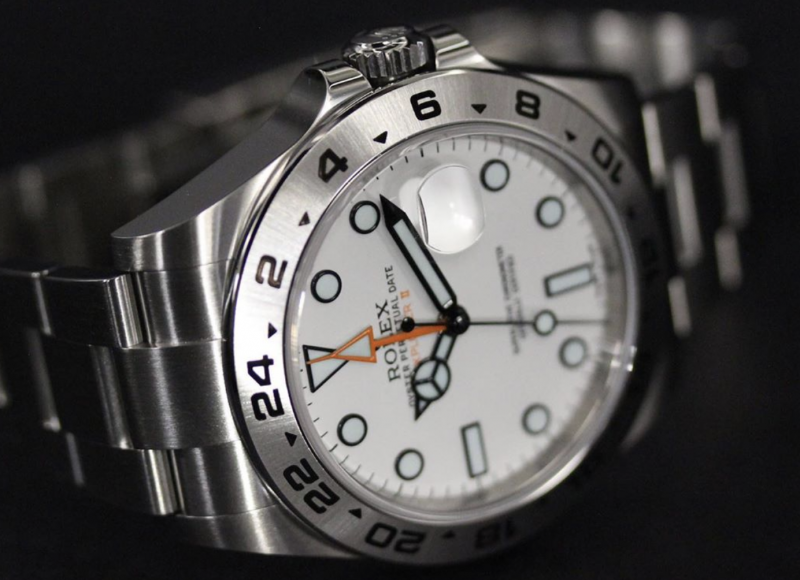 That “Oyster Perpetual‘’ name that’s emblazoned on its face is more than just branding. Rolex prides itself on crafting timepieces that can stand up to extreme conditions and that’s ever so clear in its Oystersteel cases. More often found in high-stress uses such as aerospace applications, high-grade 904L steel is used in an alloy that Rolex specifically developed in-house. The result is an ultra-tough alloy that resists corrosion and can take one serious beating while still polishing to a fine finish.

And not just the case. The Oyster bracelet is equally durable with the same fine finish and Rolex’s exclusive Oysterlock clasp to guard against the possibility of the bracelet slipping by accident. Rolex’s propriety bracelet system also allows the wearer to adjust its length by around 5mm to ensure a comfortable fit. 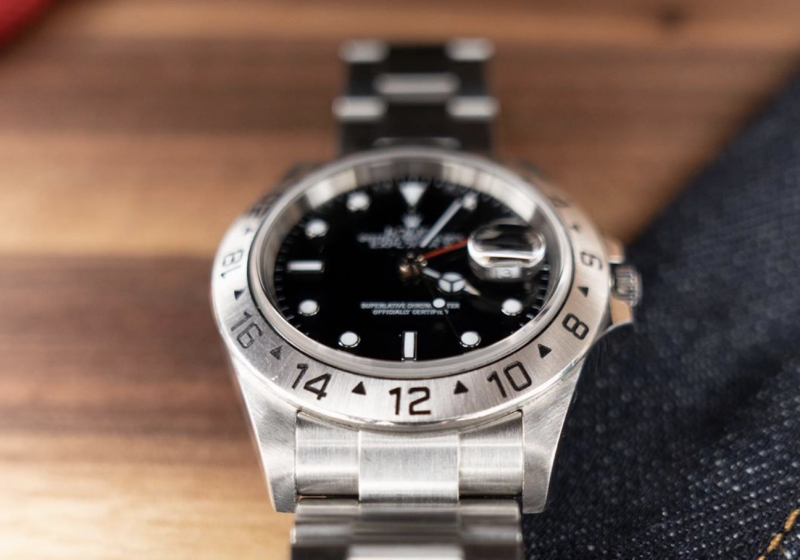 Like all Rolex watches, the Explorer II passes the stringent tests of the Swiss Official Chronometer Testing Institute for certification. Many Swiss watches, even from luxury brands, can’t say the same. Inside the Rolex Explorer II you’ll find the self-winding mechanical calibre 3187 movement. It has a Parachrom hairspring that offers a high degree of precision. The Explorer II is built to take on extreme environments. There are Paraflex shock absorbers to prevent any damage from the bumps one might encounter while out exploring.

A Favorite of the Rich and Famous

He may have taken a step back from his royal duties, but Prince Harry will never give up his Explorer II. He was first spotted wearing a classic white-dial Reference 16570 while serving in the British Army. Since then, he has carried the timepiece into civilian life. Action star Jason Statham loves to go vintage with his “Steve McQueen” Explorer II. So does Lord of the Rings and Pirates of the Caribbean star Orlando Bloom. His vintage Rolex Explorer II has a history. It was stolen from his home by the infamous “Bling Ring” burglars. But later retrieved and, quite possibly, on Bloom’s wrist right now. 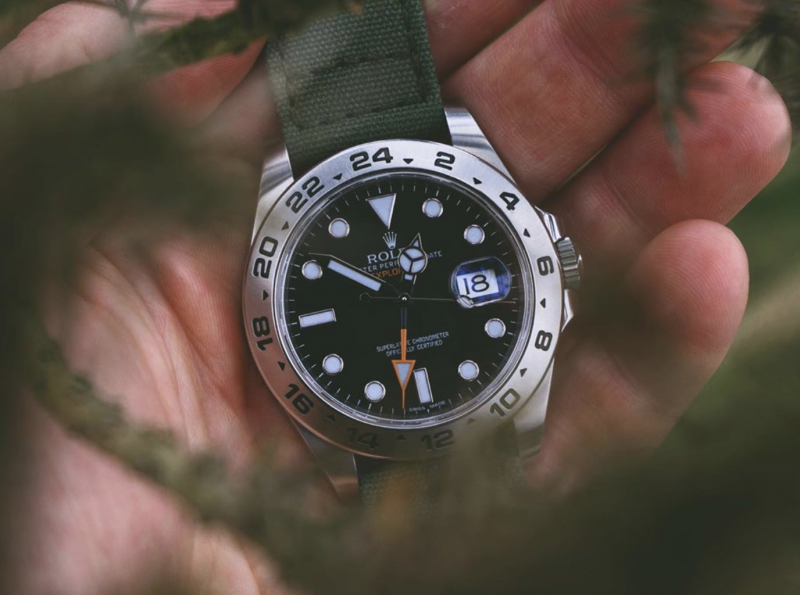 And we saw an Explorer II backstage at this year’s Oscars ceremony. Rolex designed the Greenroom where the celebs await to take the stage. They embedded an Explorer II in a table at the center of the exclusive space.

Maybe you’re an explorer and are on the lookout for that perfect watch to ascent to the top of Mount Everest. More likely, the most exploring you’ve done lately is checking out the new wine bar in town. From extreme environments to elegant evenings, you can’t go wrong with a classic Rolex Explorer II.

Best Watches to Wear With a Suit
0 Dec 6, 2018 Braeden Alexander

Common Watch Problems and How to Fix Them
0 Sep 12, 2018 William McCleary