A Closer Look at Orion Watches In the recent avalanche of affordable watch brands, Orion Watches has managed to poke its head above the pack and grab attention. That’s no easy feat. Let’s look at how this upstart microbrand has earned so much respect in just a few short years.

It began with one simple act of gift-giving. While a teenager, Orion watches founder Nick Harris received a 1955 Omega Constellation that had been passed down in the family for generations, starting with his great grandfather. Nick saw that the watch needed repair and started studying up on horology. And a passion for watches was ignited.

Nick began modifying watches as a hobby, and soon started selling them online. People readily purchased his creations and the demand for his modding grew. After some training at Seattle’s SAWTA watch-making school, Nick decided it was time to go pro by launching his own brand. Orion watches was born with a plan to hit the market in 2016. 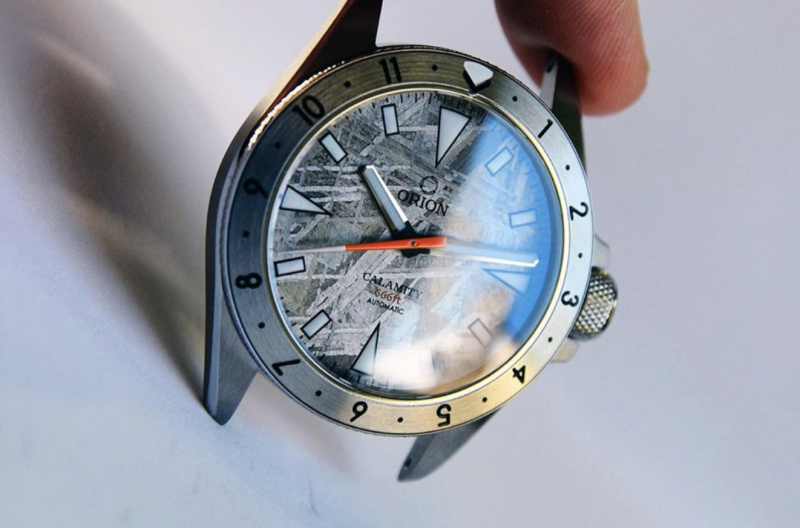 Orion Watches Debut of the Orion 1

The Orion 1 was the first watch to bow under the Orion banner, starting with a limited 300-piece run. Nick created his premiere piece for watch wearers like himself, those with slim wrists and a love of vintage flair. And for watch lovers who like things a bit out of the norm, with a 9mmdiameter that should in no way work on a 38mm case. Yet it does, with some help from hefty crown guards, a generous bezel, and oversized lugs that combine to make these large individual components not seem so big as a whole.

Keen observers will note that the matte dial is a nod to classic Omega Seamaster’s, giving the watch that dressy-but-sporty vibe that we first saw with luxury tool watches in the 1950s. 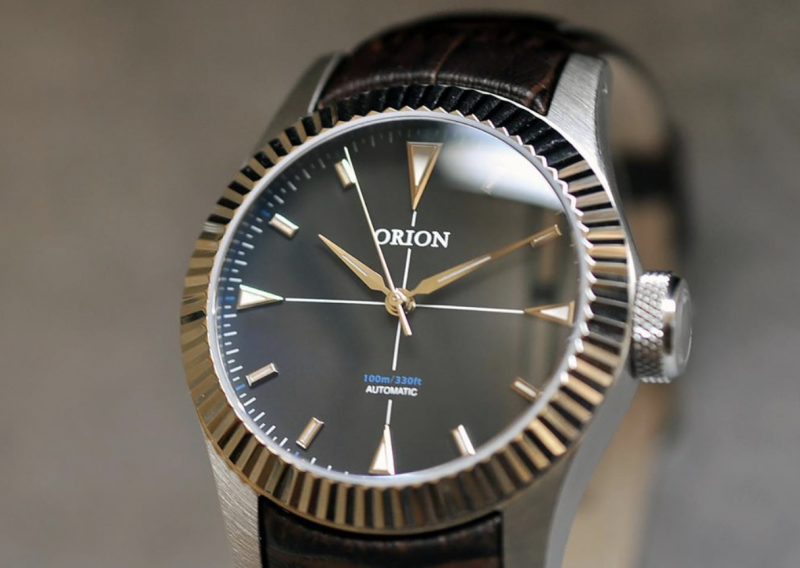 The Orion Calamity is one of their most popular offerings. And it’s not one that was destined to succeed. Today’s market is inundated with dive watches, from both established brands and a slew of recent microbrands. Plunging into those waters and making waves (how many puns can we get?) probably isn’t the best business plan. Yet Orion went for it with their Calamity.

The results? A great modern dive watch that pleases the masses. Keeping things simple, the Calamity is only offered in stainless steel with black, blue, or green matte dials. Measurements also stay conservative at 40mm across with 11.3mm thickness. In what appears to be a nod to the Orion 1 (and thus Nick’s signature feature) it comes with a massive knurled screw-down crown that’s bracketed by sloped crown guards, helping to downplay its considerable size. The dial is no-nonsense, feeling sporty with a pop of orange on the second hand. 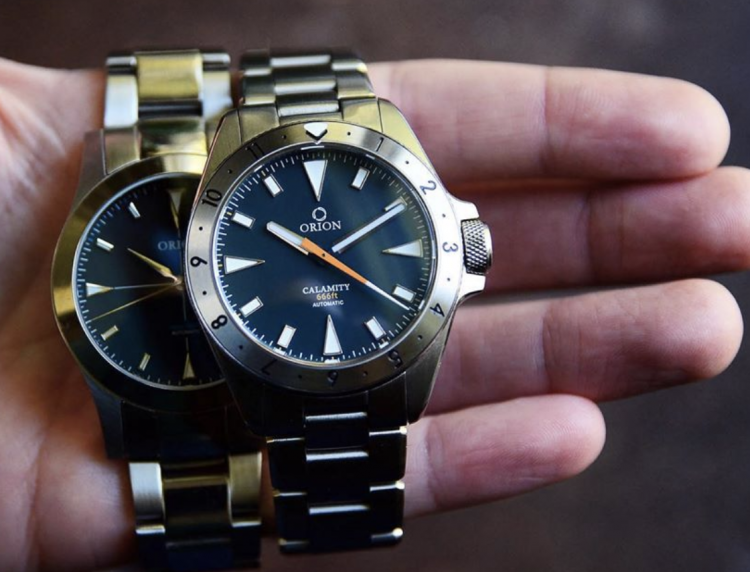 And while most microbrands go with more affordable components on the inside, the Calamity features Swiss ETA 2892 automatic movement, costing more as it’s thinner than the more common 2824. With water resistance up to 666 feet, the Calamity is ready for underwater action but perhaps feels more suited for dress-casual occasions.

Orion Watches, Going Classic and Contemporary with the Hellcat

The name “Hellcat” may have stirred up a notion about airplanes in your brain. Yes, the Hellcat was a famous World War Two fighter plane and the US Navy’s go-to aircraft for missions in the Pacific theater. And so Orion aptly named its pilot watch after this aviation legend.

A follow-up to the Calamity, the Orion Hellcat isn’t quite as vintage-inspired as its name might suggest. Yes, it does have elements of throwback flair. Such as the lack of crown guards that reminds of watches from a previous era. But overall it feels more modern. It has a thin bezel on a streamlined stainless steel case that mixes polished and bead-blasted surfaces. Large Arabic numerals give a contemporary feel to the dial. It’s available in black and an eye-catching glossy red. The latter is a rarity with pilot watches, as black, white, and blue are the norms. That makes the Hellcat an iconoclastic entry in the pantheon of aviation horology.

The Field Standard was created in reaction to the poorly made military watches. More so from that lesser microbrands who have churned out of the past few years. With their flimsy crowns and crystals that feel on the verge of cracking. Instead, Orion’s field watch features a domed sapphire crystal with AR coating and a case made out of 316L stainless steel that’s highly resistant to corrosion. And the Field Standard is water-resistant up to 100 meters.

But this isn’t really a watch that wants to get tested out in the wilds. Unless your idea of wild is a buttered rum latte at an upscale bistro. The dial goes for classic cool with large Arabic numerals, topped by pronounced cathedral hands. On a black or brown croc-patterned strap, the Field Standard oozes business-casual charm. But as field watches tend to do, it’s just as happy to dress down with jeans and a t-shirt.

Nick’s come a long way since that fateful day when he first held the family heirloom that would guide his life into the watchmaking world. And now we imagine that the cherished timepiece he passes on to future generations will be an Orion.

Taking Care of Your Timeless Luxury Watches
May 13, 2019 Nauman Rashid