Go ahead. Admit it. You’re a responsible adult who is a huge fan of comics and superhero movies. And we’re not talking about someone who just checks out the latest Marvel movie when it comes to their local multiplex. We’re talking deep down. Comics to the core, a profound belief in the superhero credos that you try hard to live by. There’s no shame. You’re not alone and you should wear your superhero love proudly. Others do, and that’s why superhero watches are so popular. Let’s look at a few of the finest.

There’s no watch brand that celebrates superheroes as much as Citizen. Their Marvel Watch Collection pays tribute to Captain Marvel, Spider-Man, Captain America, The Hulk, Black Panther, and all of The Avengers. It’s hard to choose the best from such a strong field, but there are a few standouts.

At first glance, one might not think this superhero watch has anything to do with the famed Web-slinger. The lines that adorn the dial might seem to resemble some of those on Citizen Promasters. But, on closer inspection, you can see an unmistakable spider web, wrapping around the subdials as if they’re trapped in its sticky grip. And the color scheme is pure Spidey, with the trademark red and blue hues found on the Spider-Man’s super suit. 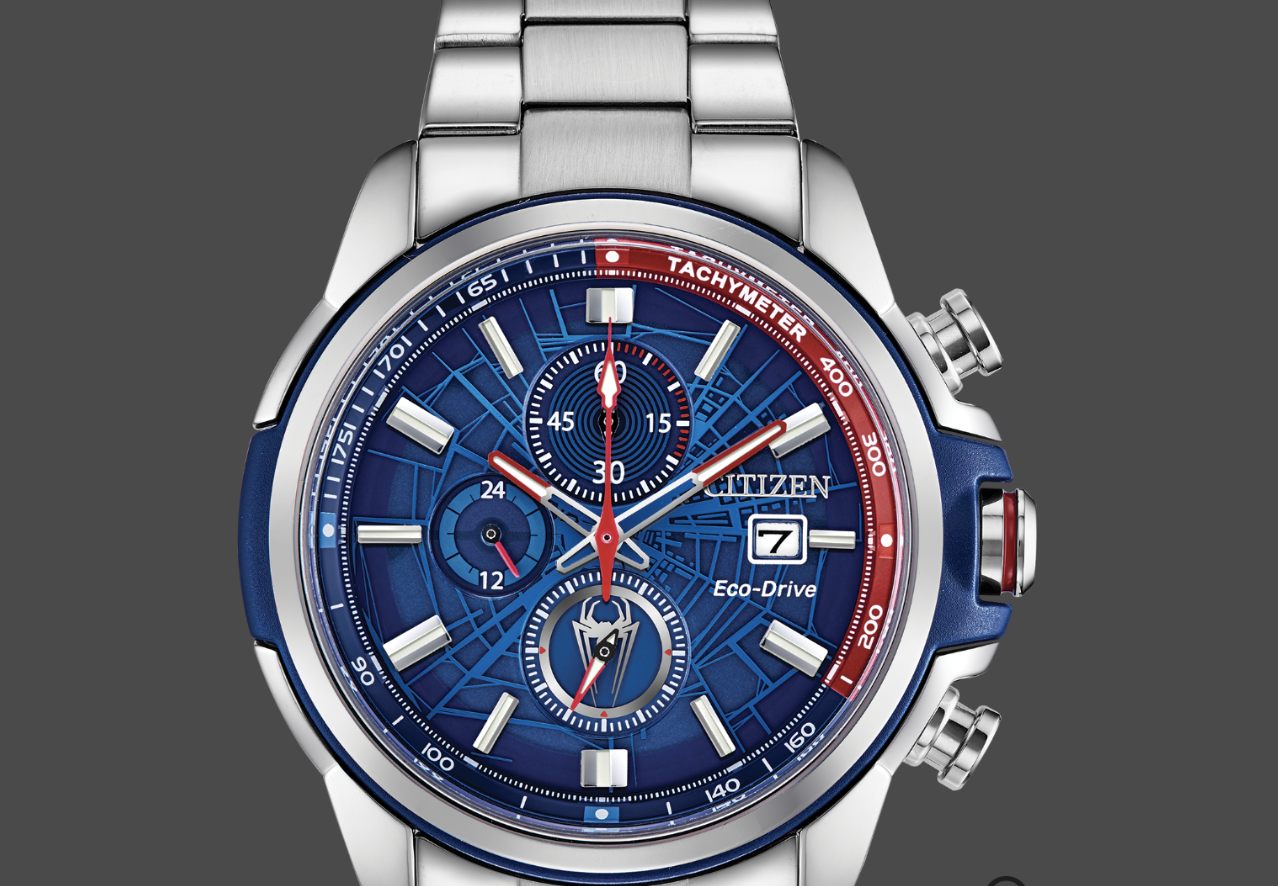 The classic good looks continue with a stainless steel case and matching steel bracelet. They are both topped off with a blue chrome-finish. You’ll probably wear it to show your love for the superhero. And most people will likely think you’re just wearing a really nice watch. A piece that is perfect for the office or casual weekend wear. Flip it over to find a spider engraved on the case back, one more detail to show your Spider-man spirit without having to broadcast it to the world.

Wakanda may be a fictional African country, but its heritage is proudly on display with the tribal patterns across the face of the Black Panther watch. This is one of the more subtle models in Citizen’s Marvel line. The black-and-silver color scheme has an air of sophisticated and sleek style. But just like the others in the line, it is powered by Eco-Drive solar technology and you’ll never need to replace a battery. 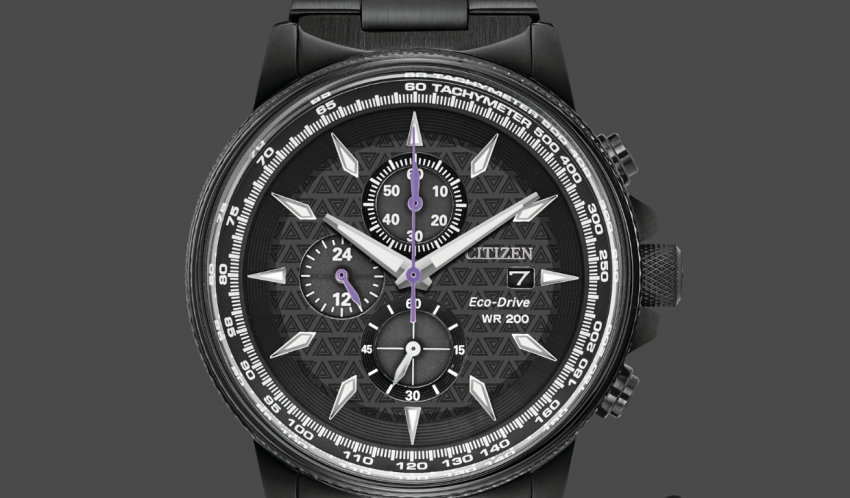 What the Captain America watch may lack in terms of sophistication it makes up for with gung-ho bravado. Hence the camouflage design on the rough-and-ready nylon strap. The face eschews subtlety with the superhero’s signature shield stamped right on the front in bold red, white, and blue. But the rest of the design is more traditional with a field watch look we’ve seen from the likes of Hamilton and Seiko. 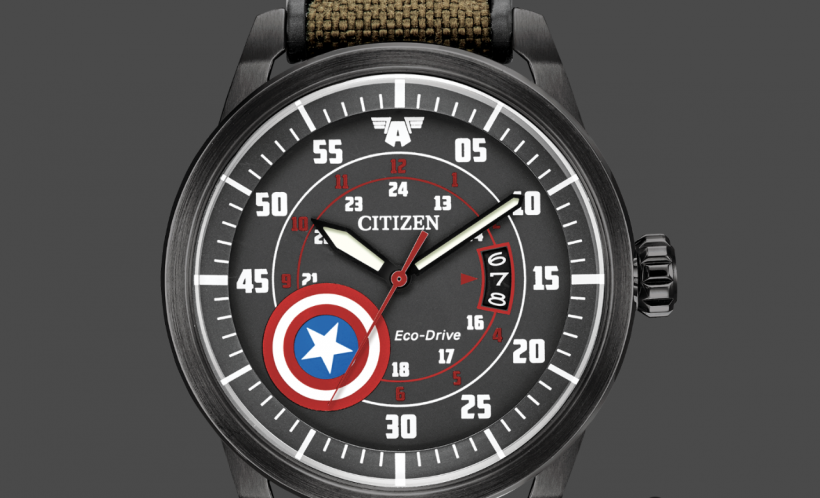 While the offerings in Citizen’s Marvel line are affordable, all coming in well under $500, we rocket way up in the price range with the Memorigin Iron Man. Part of the Avengers Series Tourbillon collection, this limited edition model has a price tag of around $7,500. What do you get for that? Well, Hong Kong-based Memorigin has made a name for itself for producing high-end tourbillons since its debut in 2011. They use in-house movements and pride themselves on seamlessly melding Eastern and Western styles for truly unique creations.

And the Iron Man watch is surely unique. The dial features the image of Iron Man suited up and in action, with a hand extended forward that displays an ample diamond. Ten smaller diamonds are spread around the dial. Add in the gold case and this luxury watch looks like it belongs on the wrist of eccentric billionaire Tony Stark. 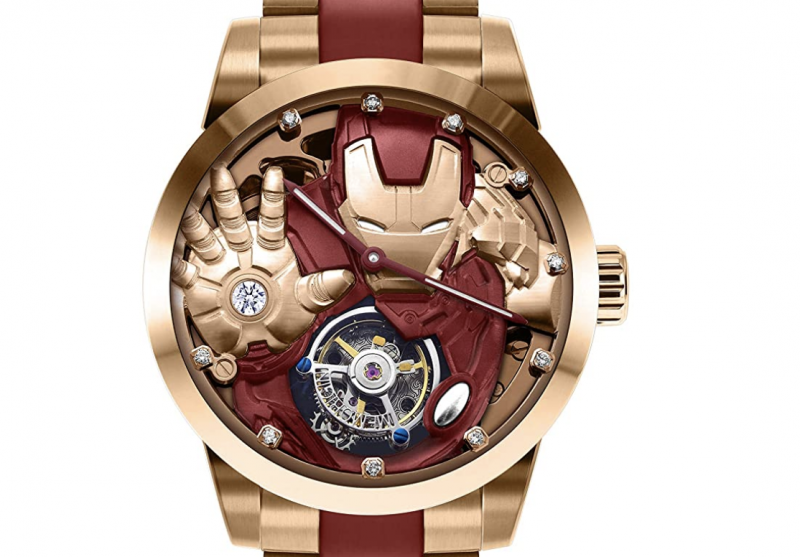 Invicta is a great brand to go to for quality and affordability. They have a history that goes back to their founding in 1837 in La Chaux-de-Fonds, Switzerland. They stated mission to create luxury watches that are within the reach of all. While they’re now owned by an American company, their commitment to accessible luxury remains the same.

One of the most visually intriguing superhero watches on the market, the Invicta Wonder Woman Lady 26836 is an eye-catching white-and-silver timepiece with classic good looks. With little contrast in the color scheme, you might not notice the Wonder Woman logo emblazoned on the face at first glance. It serves as a prominent centerpiece to the otherwise no-nonsense face. While not exactly a dress watch, this one feels kind of dressy and pairs well with a smart-casual ensemble. If you pick one up, you might consider swapping in a steel link bracelet to step up its style just a notch. 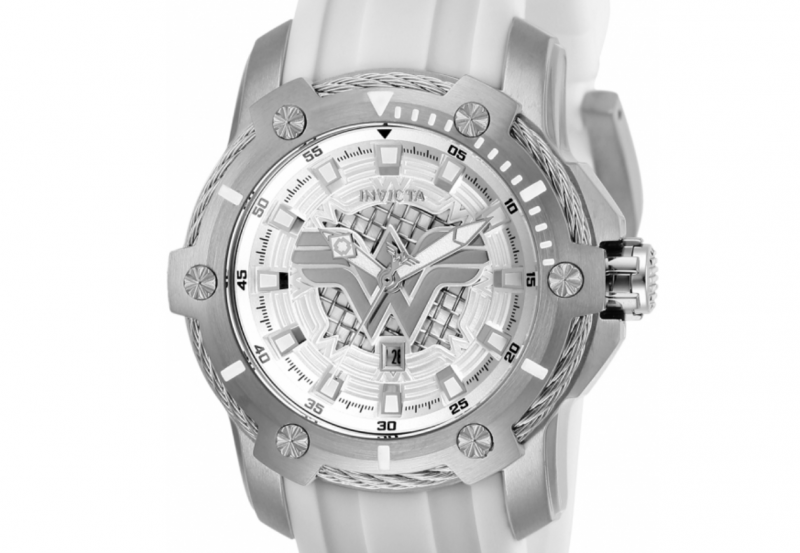 There are a number of nice options in Invicta’s Batman collection. They have about a dozen offerings that pay homage to the DC Comics hero. For something kitschy, look to the 29349 model. The model has a yellow dial featuring an action scene that looks lifted right out of the pages of a classic comic. The gold and black 29060 model looks like it would be right at home on the wrist of billionaire Bruce Wayne. But to really capture that Batman vibe, the 32369 model stands out. An almost all-black motif is accented with just a few golden touches. An outline of the bat is on its face and bordering its sharp triangular hands. 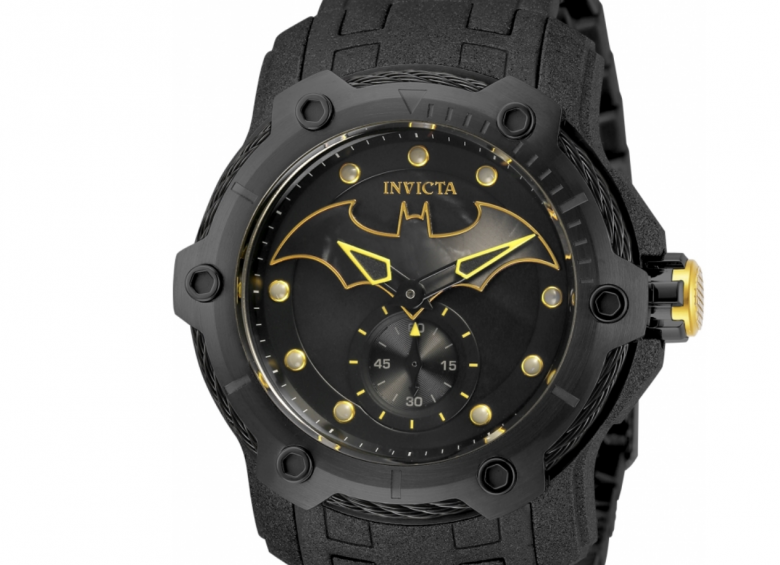 No, it doesn’t have a Bat-Signal on its face. It doesn’t bear any markings at all that would lead most to believe it has a connection to the Dark Knight. But one Rolex GMT-Master II is known around the world as the “Batman” for its distinct black-and-blue color scheme. Officially titled the GMT-Master II 116710 BLNR, it’s one of Rolex’s most popular offerings. It has a classic Oyster case of 40mm and a complementary stainless steel bracelet. A black dial is contrasted by white indices and luminescent-coated hands, save for a GMT-hand that pops with a blue hue that matches one half of the bezel. The other half is in basic black. 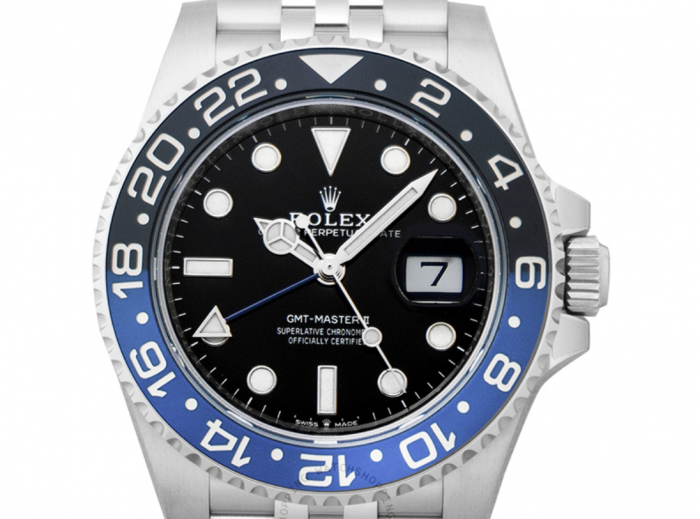 Like the Caped Crusader himself, this is one tough watch, originally designed for pro aviators. The screw-down case is waterproof up to 330 feet and the sapphire crystal is scratch proof. If you want to wear your superhero love with some subtlety, this is a top choice. (Or if you’re a Hulk fan, check out this Rolex Submariner!)

You may have to wait for that next big comic book movie to come to a theater near you. But why wait? You can go out and get yourself an awesome superhero watch right now!